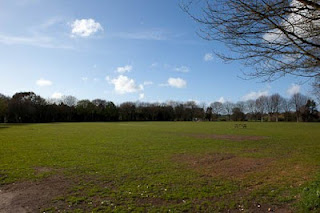 Regular readers will know that I have published a few Blogs regarding the proposal to build a new school on the St Martin's School field.

The JEP has recently informed its readers that the Environment Minister has considered the comments from the consultation exercise and has now made a Ministerial decision which will provide planning guidance for building on the school field.

Such a decision defies logic and just goes to show how the consultation process was a waste of the time, with the questions loaded in such a way to enable the Ministers to receive the answers they were seeking. Most importantly the option of redevelopment was omitted.

As a result of the report I submitted another letter to the JEP which it published in yesterday's edition and is reproduced below.

As a lead into the letter below, I wish to make it clear that I do not have a problem with demolishing, if necessary, all of the existing School buildings. Whilst the shell of the 1900 building remains, internally there is very little of the infrastructure remaining from my school days. Almost all of the playground areas have been built on and as if as suggested that the School no longer fits the purpose than it should be replaced. By being replaced on the existing site it will remain in what is deemed to be the heart of the perceived Village. As mentioned previously it is the least expensive and will save the School field which will remain intact for future generations.

Whilst much has been made of the need to provide education for St Martin's pupils one very relevant fact to come from the consultation process is that at present as many as 48% of the current pupils reside outside the catchment area.

I am sure that your readers will have welcomed the report in the Wednesday 20th June edition of the JEP which gives an update on the unwarranted and illogical proposal to build a new school on the existing school field at .
The report states that an unknown source has said that there is strong support for a new primary and nursery school to be built on the existing sports field. However as the questionnaire was drafted in such a way that building on the school filed was the best of the bad options and the redeveloping option was omitted, the result of the so called consultation is hardly surprising We were also informed that the Environment Minister had made a Ministerial decision to provide planning guidance to build on the sports field

So much for public consultation and the protection of the environment when it’s own Minister can permit building on a historic and Greenfield site when to redevelop the existing school is not only the most environmentally friendly but will save taxpayers  well over £1million.

There is also a quote from the Planning and Environment Chief Officer who states that “the 2011 Plan safeguards the site for educational use. The Principle of the site being used has already been agreed.” The Island Plan contains some 500 pages and if one searches carefully one will find that on page 275 which relates to educational facilities it records that “the redevelopment of public or private educational sites and facilities for alternative uses will not be permitted except in exceptional circumstances and only when it can be demonstrated that the premises are surplus to public and private educational requirements and the wider community need.”

Among the sites to be “protected or safeguarded” is Field 327A, , which is the existing sports field. It provides an area for sport and recreation for the school; it has been used for decades by the parish football team and the wider community including the School’s who again will shortly be holding another car boot sale on it.

It is also reported that the Parish Connetable supports the proposal to build on the school field. That is not correct because although he forwarded a lengthy and helpful submission he did not express a view either way, but was of the view that decisions on the new school should not be delayed merely to await a Parish Village Plan.

I took part in the Island Plan debate but the issue of the school field was never discussed but I believe that the intention of including the school field in the policy was to ensure that it was protected from ANY development. To now suggest that the intention was to build a school on it is totally dishonest. Where are the exceptional circumstances?
The States is often accused of failing to exercise joined up thinking but the way it has approached the decision to build on the field is a classic example of its failure.

This is Jubilee, Olympic and European football competition year. In addition is due to host the Island Games in 2015 but we cannot support our sports people to travel to for the next Island Games.

To celebrate the Jubilee there is a project called the Diamond Jubilee Field Challenge under the patronage of her Majesty and headed by Prince William. The purpose of the Challenge is to safeguard sports fields from development. It also allows for the public to nominate and then vote for sports fields which should be protected. is participating with a committee consisting of the Council of Ministers and headed by the Bailiff. The Environment and Education Ministers know, because I have written to them, that I have nominated the ’s Field, yet both are ignoring the democratic process.

The Education Minister who is also our Minister for Sport has adopted a Trappist Monk approach to the financial difficulties encountered by our sports people attending the Bermuda Island Games. The Parish Football Club still waits evidence of his promise of finding an alterative pitch. However if he re-developed the school not only will the field be saved for the cricketers and footballers but there will be a saving of over £1millon. That money could be used to finance the transport to and for updating our infrastructure for when we host the 2015 Island Games. The field would also be retained for future generations.

It would seem that the public has a win, win opportunity so why can’t that opportunity be grasped by our Ministers?

As one can above the decision to build on the field is illogical and ill planned. When the new school is finally built the existing one will be handed over to the Parish which I am sure will be as much welcomed as receiving a hole in the head as it is already struggling in knowing what to do with its ailing Rectory.