In my previous Blogs on Senator Bailhache in part 1 to view(click here) I reported how Bailiff and now Senator Bailhache was able to jump the law drafting queue thus ensuring that the “Loi 1960 au sujet du College Victoria.” was amended to cater for an independent governing board, where he was to be it’s first Chairman.

In part 2 to view (click here) I reported how Senator Bailhache although conflicted denied the right to lodge amendments to the proposition on the re-organisation of the ’s Secondary Education. The debate was acrimonious; the proposition was defeated and led to the resignation of the Education President Connetable Iris le Feuvre who was succeeded by Deputy Evelyn Pullin.

Deputy Pullin had considerable experience in education having previously been head teacher at near the Kennington Oval in and later head at the . I had got to know Evelyn on my return to and offered to help in her election for Deputy, she accepted and I ran her campaign. Interestingly she told me that a young student living nearby would like to get involved. He joined me, proved to be a quick learner and a very useful and enthusiastic member. That student is the now Senator Ozouf. Deputy Pullin was elected and defeated a couple of young aspiring candidates who are now States Members, (Senator and Deputy Rob Duhamel.)

Deputy Pullin had two main issues to address; attempting to solve the problems following the Secondary Education Debate and the ’s independence issue. In fairness to Deputy Pullen I don’t think she was politically astute for the task. A watchdog group had been formed and known as Equal Opportunities in Education (EOE), its Chairman was the late Christopher Lakeman. The Group had been quite vociferous prior and after the Secondary School debate and also raised a number of questions in relation Victoria College’s legal status, the lease of its premises, its financing and its affect on the Girls’ College. There was also the issue of the non payment of fees by its sixth form students.

I had written to the Solicitor General Stephanie Nicolle re the payment of Rates and she was of the view that as was independent it was liable. This would have further financial implications because the College would have to raise the revenue to meet its obligations which I doubt if any consideration was given to the matter prior to amending the College Loi.

In October 1995 I lodged a proposition requesting the Education Committee to prepare legislation – (a) (i) to repeal the Loi (1994)(Amendement No. 3) sur le Collège ;
(ii) to provide for the Board of Governors of Victoria College to be constituted on the same basis as the four non fee paying secondary schools, Hautlieu and the for Girls;
(b) request the Policy and Resources Committee to cause the necessary evaluations to be undertaken to determine whether the preparation of the necessary legislation might be added to the 1995/96 States Law Drafting Programme.

Initially my proposition was supported by the Education Committee but it intimated that it wished to make a minor amendment in relation to Her Majesty having Right of Attendance. This was an issue which did not trouble me. To allow for drafting I agreed to delay the date set aside for the debate. However further requests for deferment were requested to allow for consultation between the Governors and the Committee.

I reluctantly agreed and eventually a date for debate was set or was unaware of was that the Education Committee and the Governors were drafting a “Memorandum of Understanding.” This was akin to Neville Chamberlain’s letter of appeasement and it was patently obvious that Deputy Pullin and her Committee had allowed itself to be swayed by the Governing Body. However the Memorandum provided a cop out for many States Members who were Old Victorians or had offspring’s attending the College.

Prior to the debate the Board of Governors circulated a three page document stating its good a working relationship with the Education Committee and how it had invited the Education President and Vice President, (Deputies Pullin and Norman to represent the Committee on the Board. The letter made it pretty clear that although it valued its new found independence it still expected the States to continue providing the funds.

The last page is published below and as one can see the signatories which included the Bailiff and his Deputy Francis Hamon (although their titles are omitted) were urging the Members to reject the proposition of the Deputy of St Martin, which was me.  At the foot of the page one can see that neither Deputy Pullin nor Norman was asked to sign the letter. If they were supposed to be Board Members one may ask why they were not asked? 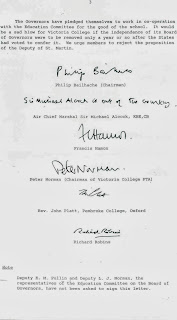 The result was as anticipated with my proposition being rejected by 37 votes to 10, but it was a hollow victory because too many questions remained unanswered. Deputy Pullin soon ran into any number of problems including the possible relocation of the onto land and premises which were now “owned” by . Whilst there was considerable open debate on the Board’s status what was conveniently kept under wraps were the allegations of abuse by staff member Jervis- Dykes which is well documented in a report by Stephen Sharp to the Board of Governors and the Education Committee.

Jervis-Dykes was accused and sentenced for 6 counts of indecent assault and one count of possession of an indecent photograph of a child. The headmaster resigned as a result of the issue. Stephen Sharp was quite scathing about the College’s handling of the complaint and stated the handling of the complaint was “more consistent with protecting a member of staff and the college’s reputation in the short-time than safeguarding the best interests of the pupil.”

That statement does not surprise me as I was the recipient of considerable verbal and written abuse from people with connections who appeared to follow the principle of “my college right or wrong.”

I find it difficult to accept that concerns about Jervis-Dykes did not reach the ears of the Governing Body or Education Committee, but one wonders where the buck stopped. Deputy Pullin’s tenure as President was short lived, as mentioned above, I don’t think she was politically astute and in trying to please everyone, pleased no-one.Below is another Al Thomas cartoon which was published in the JEP which sadly was appropriate.

My proposition was debated on the Deputy Bailiff Francis Hamon who was due to preside retired from the Chamber to allow for the Greffier of the States, Geoffrey Coppock to take over the Presidency. Presumably as a Board Member Mr Hamon felt conflicted, however, if that was the case why did he and Philip Bailhache sign the letter above? As Crown Officers should they be urging States Members to reject a fellow Member’s proposition? 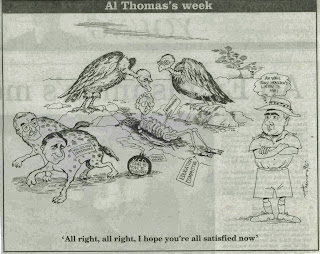 Deputy Pullin resigned and was succeeded by Deputy and now Connetable who was made of sterner stuff. As a former De La Salle student he was well aware of the different nature of and De la Salle which was a private school which owned its own property and assumed full responsibility for its capital development. It was evident that the Victoria College Governors wanted independence from the States but still wanted it to assume responsibly for meeting all the Colleges running costs.

Under ’s presidency he successfully lodged a proposition on similar lines to mine. Peace was restored but there were a number of casualties including the sixth form students who are now required to pay fees. The Victoria College Governing Body is now the same as the other Secondary Schools including the .

It will be interesting to read what historians will make of Senator Bailhache’s short excursion into affairs. Had he succeeded who knows whether it would have continued to provide a traditional type of education at modest expense for parents or would it have become an exclusive public school?

What is evident is that Senator Bailhache was able to able to influence a number of people who acquiesced apparently without questioning his motives or the fact that he was abusing his Office.
Posted by Bob Hill at Monday, September 23, 2013