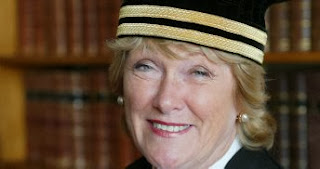 In early March this year following a review undertaken by Jan Korris on behalf of the Safeguarding Panel for the Diocese of Winchester Jersey’s Dean Bob Key was suspended.

Later in March it was announced that Bishop hn Gladwin was appointed to head a Visitation/Investigation. The Terms of Reference (TOR) were published and it was evident that they mainly concentrated on the Constitutional position between the and but importantly did not include the Dean’s handling of an abuse complaint made in 2008 by a lady identified as HG against a Church Warden identified as EY.

The Dean’s suspension was lifted in early May following considerable pressure from Senator Bailhache and other interested parties. The Dean publicly apologised to HG but like the Archbishop of Canterbury and Bishop of Winchester has not done so personally.

On 15th May the Winchester Diocese released news that Dame Heather Steel a former High Court Judge with strong links with the judiciary was to lead an investigation into the 2008 church safeguarding complaint. The investigation would feed into the hn Gladwin investigation, but surprisingly no TOR was published.

Following the publication of several Blogs on the Dean's suspension, HG contacted me and we agreed that I should act as her mediator. I made contact with John Gladwin and arranged to meet him with HG in London on 11th June. I envisaged that the investigation process would be a traumatic experience and at the outset had made it made abundantly clear that the Church of England should provide HG with some tangible support as she was living on the streets. I also asked that arrangements should be made for the public apologies to be given personally.


At the June meeting concerns were expressed regarding Dame Heather’s conflict and absence of her TOR. HG’s deportation was most unjust, was a life changing experience, should certainly have been included in the TOR and we sought confirmation.

A promise was made re tangible assistance, we would receive a copy of the report made from notes taken at the meeting, HG agreed to attend a further meeting and I would continue to be the intermediary and all communications would be through me. We would receive a copy of Dame Heather’s TOR which we anticipated would include HG’s arrest and deportation. We also expected hn Gladwin to brief Dame Heather of our meeting and agreements. To date no assistance has been given, no clarification given re the TOR, no second meeting has been arranged and Dame Heather has not interviewed HG.

What is the significance of HG’s arrest and deportation? For a full account it would be helpful to read my Blog “Did the punishment fit the crime? “ posted on 14th May to read please click HERE. In summary by 2010 HG felt a great sense of injustice, not only did she believe that the Dean, the former Bishop Michael Scott -ynt and Safeguarding Officer Jane Fisher had failed to satisfactorily deal with her complaint against the Church Warden but there was no way they could be accountable as even her complaint to the Arch Bishop of Canterbury about their failure was ignored. In short she felt betrayed and humiliated. This betrayal is exacerbated following the recent June meeting.

In attempting to seek justice she made repeated telephone calls and sent emails to the Dean, Bishop and Jane Fisher. Korris claims that HG’s demanding and abusive emails swung between anger and fear. I am not condoning HG’s actions but I do question whether they were deserving of being arrested, detained in La Moye Prison for 2 weeks before being deported, left destitute in the and banned from returning to for 3 years.

Korris on page 41 says; “The decision and manner of HG’s deportation requires further investigation. It is clearly a matter of concern that a vulnerable adult in such a distressed state could be removed from with no thought to her imminent care needs.”

In page 47 in her list of recommendations which form the basis of the Steel TOR Korris records; “There will also need to be an investigation into the deportation of HG on 11th October 2010 and why there is there is a complete lack of recording of this matter by Dean RK from the date of her arrest.”

The Steel TOR was published in August and it is unclear whether the deportation is included so to seek clarification. I sent emails to Dame Heather on 15th & 27th August, 3rd, and 9th and 20th September, I also said that I would be pleased to meet her to discuss the matter. John Gladwin was copied in to all these emails.
Last Thursday 3rd October I again emailed Dame Heather with copy to hn Gladwin stating that I would be drafting another Blog on Monday and asked whether the arrest and deportation were in the TOR and if she intended to meet me.

Unfortunately I have not received a reply and one is left to wonder whether Dame Heather is incredibly busy, inefficient or just rude. On her appointment Bishop Tim Dakin, said, “We are enormously grateful that Dame Heather has offered her considerable expertise to us all. As I have said before, we cannot stress enough the importance of safeguarding. We are committed to understanding fully the circumstances of this complaint and to ensuring that we take whatever action is required to ensure that our Church is a safe haven for the vulnerable.”

It is becoming evident that neither the Church nor Dame Heather is really interested in fully understanding HG’s complaint let alone address it and the real purpose of the Visitation is to address the Constitutional issue. This claim was made by the Dean’s supporters months back who claim that the Dean and HG are just pawns in a much bigger game.

It is now 7 months since the Dean was suspended and on Friday it will be 3 years to the day that HG was deported. If the Visitation is to have any credibility then Dame Heather must abide with Jan Korris’s recommendation and investigate HG’s deportation. The least she can do is to clarify her TOR and if she has no intention of reviewing the deportation issue then someone else should be appointed to so. It seems inconceivable that any report can be compiled unless all the concerns are addressed, and the complainant and all the witnesses are interviewed.

To read “Did the punishment fit the crime” please click HERE.