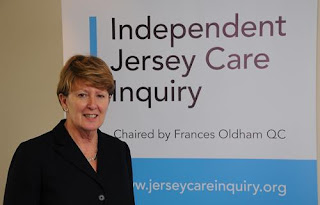 The next phase of the Hearing will commence next Tuesday 20th October.


In Part 1, the Panel heard evidence from former residents of the Jersey care system, those who worked in child care services and those accused of abuse.


Phase 2, will look at the decisions taken in relation to the timing of the police investigation, subsequent decisions to prosecute alleged abusers, whether or not those responsible for deciding which cases to prosecute took a professional approach and was that process free from political interference.
In Phase 3, the final phase of the Inquiry, will examine whether the child care system since the war was adequate, what went wrong, has the system changed for the better and what is the way forward.


Those who have been following the Inquiry will have been impressed with the Panel's attempts to seek out the truth and it is now evident that there were victims of abuse and their concerns were not adequately addressed.


In Phase 2 the Panel will seek to establish the competence of those entrusted with responsibility of safeguarding the interests of the victims and did they short change those who sought justice. Among those due to appear during the next few weeks are police officers, politicians, Crown Officers past and present and from all ranks.
We should hear what led to Operation Rectangle, was it justified and was it the failure that critics with vested interests have claimed. Were the Crown Officers even handed and were their decisions really in the public interest? I also hope the Panel will seek answers as to whether there was justification to suspend the Police chief and how was it that around £2million was spent trying to justify the suspension and to cover up the actions of those involved.


The schedule for next week’s Hearing is posted on the Jersey Care Inquiry Website, however for reader’s convenience I can report that proceedings get under way at 10am next Tuesday with an opening address which will be followed at 11am with the first witness Anton Cornelissen giving his evidence.


On Wednesday at 10 am, Brian Carter will give his evidence and at 2pm will be followed by Emma Coxshall.  I understand the 3 witnesses are from police headquarters.


On Thursday at 10am I am due to give evidence and note that I am to be followed at 2pm by an unnamed public witness which awaits confirmation.


Whilst I have no wish to stay in the witness box for as long as Alastair Cook is at the crease during the current Test Match, given the length of my statement I will be surprised if we don’t need a bit of extra time.
I believe the next Phase will be illuminating and with the approach of Guy Fawkes it’s likely that there will be a few extra fireworks coming our way.  It is evident that the Panel has been doing its home work and has been prepared to challenge witnesses to substantiate claims made in their statements. Therefore it will be interesting to see how well the so called heavyweights cope with their evidence.
Posted by Bob Hill at Friday, October 16, 2015