Jersey's Dean----Steel and Gladwin Reports On The Rocks 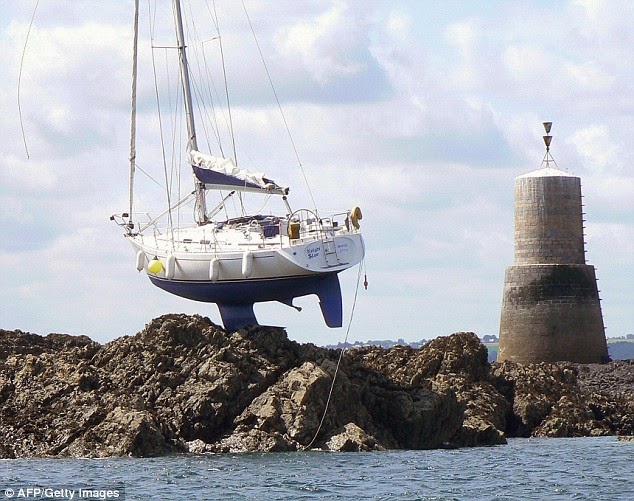 It was last March that the Bishop of Winchester Tim Dakin suspended ’s Dean, Bob Key. It was also last March that I published my first Blog on the matter. One year on I thought I would look back at what has or has not happened and what has been achieved.

The Dean was suspended following a review conducted by Ms Jan Korris into his handling of a complaint made in 2008 against a Church Warden by a young lady known as HG.

One question that has never been answered is what prompted Winchester to engage Jan Korris to conduct a review and what did it hope to achieve particularly as neither HG nor the Church Warden were ever interviewed. HG was never made aware of the review or received a copy of the report nor asked to comment on it.

The Korris Report contained a number of the recommendations and also identified a number of failings by the Dean and the Parish Vicar in the way they dealt with the complaint. The report also recommended that the way HG in 2010 was arrested, detained in La Moye Prison for two weeks, then removed/deported from in her pyjamas and left destitute at a airport on cold October night should be investigated.

The Korris Report is dated March 2013 yet within a matter of days of it's publication the Dean was suspended, unreserved apologies given to HG  and it was announced that a Visitation would be conducted by hn Gladwin the former Bishop of Chelmsford. Quite dynamic action but thereafter it has been down hill all the way as those at the helm have struck one rock after another and is now stranded.

In looking back what has been achieved? At some stage it was unwisely decided that hn Gladwin would only address the Constitutional issues and Dame Heather Steel would address the Dean’s handling of HG’s complaint but no immediate Terms of Reference were published. However when published they were narrow and unclear. There was also the issue of Dame Heather's perceived conflict which has never been addressed.

It was soon evident that was totally unaware of “the ” and that questioning any establishment figure would be seen as an attack on . It only took a letter from Senator Bailhache to the Archbishop of Canterbury to lift the Dean’s suspension even before he had been interviewed by the Investigators so why he was suspended in the first place.

However it should be noted that on being reinstated the Dean apologised for mistakes made in 2008 and publicly apologised to HG, but not personally.

Last June with HG I met hn Gladwin and Christine Daly in and some very important promises were made. Meetings would be recorded and reports to be agreed. Further interviews would be arranged so that HG’s side of story could be recorded and acted upon. Tangible assistance would be given to help her and to avoid unnecessary stress all communications would come via me. Also reference was made of Dame Heather’s perceived conflict. It is now evident that these promises were not forwarded to Winchester or Dame Heather, why?

In early August a full page advert on behalf of the Jersey Laity appeared in the Jersey Evening Post. It asked members of the public who had experienced inappropriate or unbecoming behaviour by Bishop Dakin to write to Dame Heather Steel. The advert clearly placed Dame Heather in both camps but neither she nor took any steps to refute or clarify the Adverts’ claims.

Dame Heather’s investigation has been a disaster where she not only failed to interview HG or the Church Warden but her report which she claimed to have completed last October is apparently still incomplete. I wrote to Dame Heather on seven occasions asking to meet her but somehow my emails which were also copied in to the Bishop’s Chaplain and hn Gladwin were ignored until late October when by that time Dame Heather had almost completed her report.

It was hoped that HG would accompany me to Church House in but on learning of her visit, the venue was changed because the powers that be refused to allow her on the premises. Unfortunately HG did not attend the meeting but Dame Heather promised that my meeting with her would be recorded and I would be given a copy of the transcript.

However Dame Heather has reneged on her promise and has refused to give me a copy. I have made repeated requests to Bishop Dakin for a copy but although first promising to let me have it he now fails to even respond to my further requests.

In November Bishop Dakin announced that although Dame Heather had not completed her report no disciplinary action would be taken against the Dean and the Vicar. He also announced that the Bishop of Dover would now have oversight over and that another review would be commissioned on the Constitution issue.

We are now into the third week of March but what has been achieved? It might be easier to ask what has not been achieved. For a starter hn Gladwin has not published his report but now that a similar review has been commissioned his report is irrelevant.

Dame Heather submitted her report at the end of October yet almost 5 months later we are told that it has not been completed. If that is the case why has she refused to see HG or arranged for some one else to interview her so that her account of events is recorded? At the States Sitting on 4th March Deputy Le Fondre via a written question asked the Chief Minister to provide an update on the likely date for the publication of the Dame Heather Steel review?

Chief Minister Senator Ian Gorst replied “The position has not changed since I made my statement to the States Assembly in January. I continue to expect that the Bishop of Winchester will honour the commitment made in the terms of reference of the investigation by Dame Heather Steel that, upon receipt of the final report, the Bishop of Winchester will supply a copy to the Bailiff, the Dean and the Ministry of Justice. Lambeth Palace confirmed in January that the reports being conducted by Dame Heather Steel and Bishop Gladwin will be completed in due course. I hope that the Steel report will be completed as soon as possible in order that our community can be strengthened through reconciliation and healing based upon integrity and transparency.

I thought the Chief Minister was being hypercritical because he has commissioned a report on HG’s arrest which has not been satisfactorily investigated because like Dame Steel, the investigator Ms Glenys hnson has not interviewed HG so her report will be as worthless as Dame Heather’s. Where is the integrity where is the transparency?

Following my meeting with Dame Heather I published a Blog on 28th October 2013 ’s Dean--- The truth, the whole truth or nothing but a whitewash? At  its conclusion I said the following, “What is becoming abundantly clear is that the Visitation is a waste of time and money, the guilty will be found innocent and the innocent condemned. What sort of message is the Church of England sending out to the poor, needy and vulnerable members of our society?

I stand by that statement, the Visitation has been a meaningless and financial disaster as events have overtaken it. hn Gladwin’s report is pointless and Dame Heather’s should be confined to the dustbin. Not only has she failed to conduct her investigation in a satisfactory manner but her conflict and bias is evident by her failure to see HG and supply me with a copy of the transcript in which Dame Heather was less than discreet in her support for the Dean and her condemnation of HG.

The promise to assist HG has not been kept and ’s decision last November to refer her to the NSPCC without consulting her or me was a disgrace. In his press statement dated 22nd November the Bishop said he was praying that HG would accept what she had been offered. He knew full well that his offer was totally unacceptable and has since been reminded that it is action not prayers that is needed, but alas my advice is still being ignored.

Over £200k has been spent, no reports have been published, Winchester no longer has oversight for , apologies have not been given personally, promises made have not been kept and HG is still being ignored. What is interesting is that the Church Warden is certainly still within the fold and it is strongly rumoured that he is a candidate for the Church Warden’s position at the . If that is the case then God really does move in mysterious ways.

I have tried to find the positives from the past 12 months but to no avail. Perhaps readers may be able to inform me.
Posted by Bob Hill at Thursday, March 20, 2014