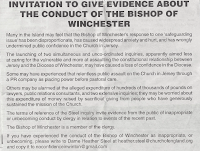 When I published my previous Blog, due to technical difficulties, I was unable to publish the advert which appeared in the Jersey Evening Post on Saturday 10th August, thanks to the assistance of fellow Bloggers I am now able to publish it in full which should be helpful to readers outside the .
THE STEEL INVESTIGATION
Following the advertisement placed by the Rt. Rev, the Lord Bishop of Winchester on 3rd August 2013 a group of concerned members of the laity of the Anglican Church in Jersey wish to affirm their confidence in the love of God made real in the faith and lives of those who make up the Church in Jersey, and in particular their trust in all those who offer pastoral care in their name. We wish to affirm our reliance upon the whole Church in the as it tries to live out the love of God made tangible in Jesus Christ and made effective by the power of the Holy Spirit in the lives of those who respond to that love.
The love of Christ, expressed through the Church, mends broken lives, brings hope to the hopeless, purpose to the wounded, and forgiveness to those in need of it.
The Church in has a long record of living out this love and providing a safe space for those in need.
We retain the highest confidence in the safeguarding record and practice of the Anglican Church in . It has fed the hungry, housed the homeless, comforted and tended the sick, and called the powerful to account. Countless lives have been transformed by Christ’s presence in a caring Church in .
Safeguarding provides for the care of the vulnerable, but also provides protection for those who offer that care. Courageous support is often provided by the Church for people who are deeply disturbed in the most challenging circumstances.
The Church is not, and cannot be perfect, and sadly, from time to time, confidence and hope can be damaged by people getting things wrong.
INVITATION TO GIVE EVIDENCE ABOUT THE CONDUCT OF THE BISHOP OF
Many in the may feel that the Bishop of ’s response to one ‘safeguarding issue’ has been disproportionate, has caused widespread anxiety and hurt, and has wrongly undermined public confidence in the Church in .
The launching of two simultaneous and unco-ordinated inquiries, apparently aimed less at caring for the vulnerable and more at assaulting the constitutional relationship between and the Diocese of , may have caused a loss of confidence in the Diocese.
Some may have experienced that relentless public assault on the Church in through a PR company as placing power before pastoral care.
Others may be alarmed at the alleged expenditure of hundreds of thousands of pounds on lawyers, public relations consultants, and two extensive inquiries; they may be worried about this expenditure of money raised by sacrificial giving from people who have generously sustained the mission of the Church.
The terms of reference of the Steel inquiry invite evidence from the public of inappropriate or unbecoming conduct by clergy in relation to events of the recent past.
The Bishop of is a member of the clergy.
If you have experienced the conduct of the Bishop of as inappropriate, or unbecoming, please write to Dame Heather Steel at heather.steel@churchofengland.org and copy it to noconfidenceinwinton@gmail.com (End)
Since the advert was published it has been revealed that members of the laity from both and held a private meeting organised by Senator Bailhache. The information coming to hand is that the meeting enabled attendees to raise concerns emanating from the Bishop’s Visitation and their relationship with the diocese of .
I would put a few pence that if safeguarding was on the agenda it was way down the list. I would put even a few more pence that the Dean's handling of HG’s complaint or concerns about her welfare was not even on the agenda.

The Saga began with concerns over safeguarding and the alleged failure of the Dean and others to deal with a complaint against a Church Warden, those concerns now seem to be forgotten and is more about the clergy's self preservation than caring for the vulnerable.

Given that Senator Bailhache was involved it is likely that the subject of a break away from was high up on the agenda. The Senator not content with political independence appears to be looking at religious independence, is he using the farce as a trial run for greater events to follow?
We don’t know whether those behind the publication of the advert are the same people involved in organising the meeting but it is interesting to note that the advert contains the following: “The Church is not, and cannot be perfect, and sadly, from time to time, confidence and hope can be damaged by people getting things wrong.”
Those responsible for the advert have got things badly wrong, they have done so anonymously and are asking members of the public who have experienced inappropriate or unbecoming conduct of their Bishop to write to Dame Heather and copy them in. If they do not have the courage to disclose their identity, how can they expect people to have courage to submit their comments to an anonymous group?
One wonders whether Bishop Dakin is aware of his revolting clergy or whether he really cares. Apparently he was not available but when asked for a comment but a “spokesman” on behalf of the Diocese of Winchester released the following statement.
"The Bishop of is fully committed to the historic relationship between and the rest of the Diocese of . The current safeguarding inquiries are focused purely on ensuring that vulnerable people in the , and the Diocese as a whole, are given all the support they need. The Church of England's recent General Synod made clear that safeguarding is of paramount importance throughout the Church. Every single Diocese, including the deaneries and parishes that form them, is expected to take safeguarding equally seriously.

"Significant concerns were raised around the handling of a serious abuse complaint by a vulnerable young woman in in 2008. It would have been wholly irresponsible for the Diocese and the Bishop to have ignored these concerns and the current independent inquiries have been given the full support of the Archbishop of , the Dean of and the Chief Minister. The central Church of England is also funding a significant proportion of the cost of the inquiries because of its wider commitment to safeguarding.

"The Bishop of and Dame Heather Steel agreed that her investigation should be carried out as openly and transparently as possible. As such, she placed a public notice in the Evening Post, calling for anyone with information or evidence that could aid her work to come forward." (End)

If one reads Dame Heather’s TOR (below) they will note that it states that she is going to conduct her investigation in private, therefore why is the “spokesman” saying the investigation should be carried out as openly and transparently as possible.

Also why did the spokesman not take the opportunity to comment on the advert and more importantly confirm whether Dame Heather is content to receive evidence of the Bishop’s perceived inappropriate conduct.

As there is no comment I  have written to Dame Heather asking what part if any she has had in publishing the advert and has she agreed to receive evidence of the Bishop’s inappropriate conduct. As her TOR are unclear I have also asked whether she will be investigating HG's arrest, detention and deportation from Jersey in line with the Korris recommendation? As yet I have not received a reply.

Dame Heather Steel's Terms of Reference can be read HERE

The Korris Report can be read HERE

The following Blog by Tony the Prof is well worth reading please click HERE
Posted by Bob Hill at Tuesday, August 20, 2013